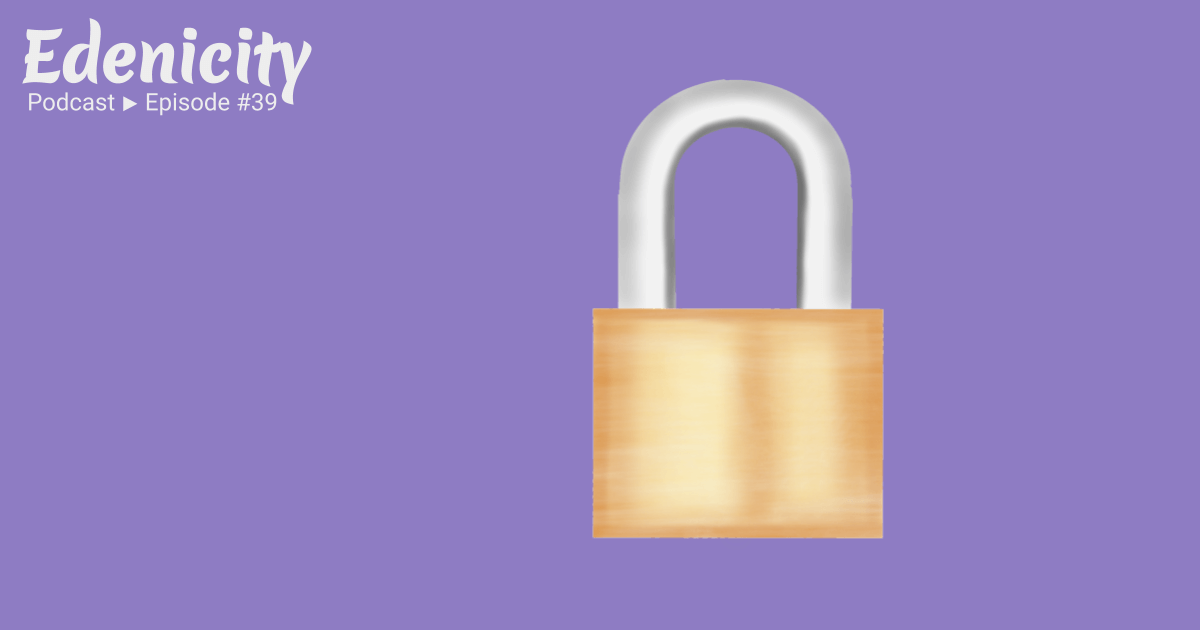 The dystopian fear that haunts sustainability, and why Edenicity can win you far more privacy than you have now.

Will I be more or less free in Edenicity?
Intro [music]
More freedom
Freebies ... and taxes
Less privacy?
Pushing back
But what about those taxes?
Mechanical vs. ecological
Close [music]
Sources

▲ Will I be more or less free in Edenicity?

Here's another question no one has asked me, but they should have.

Edenicity seems like a utopia, which conjures visions of societies that tried too hard and became dystopias. I'm talking about futuristic, overregulated nanny states, such as Aldous Huxley's Brave New World.

Huxley's world was completely in your face all the time, shaping your behavior and desires constantly from well before birth to your dying breath. Its goal? A world without suffering. Its methods? No Liberty, and especially no privacy. Ever.

But Edenicity never was meant to be a utopia. It begin as a design project to end the mass extinction without economic collapse. To my delight, its ecological design ended up offering a much richer lifestyle than the world has ever known. But it does shrink our land, energy and resource consumption by More than 97%, which exceeds the original goal of 95%.

Can that even be done without a lot of top down control and surveillance? And bear in mind that your privacy is already being infringed big time by powerful entities that don't even care about the environment or ending suffering. If you have your smartphone nearby, it's scrutinizing your every word to target ads 24/7.

Privacy is your most basic freedom and it's under attack. So the question is: when it comes to privacy, whose side is Edenicity on?

Welcome to Episode 39, where I'll discuss the Edenicity of privacy.

Let's start with that first question. The one about freedom. I won't keep you in suspense: you'll be a lot more free in Edenicity.

For one thing, as detailed in Episode 26, Edenicity's incarceration rate is likely to be much lower than any other modern city. Less jail equals more freedom. That's pretty basic.

Also, the Universal Basic Income described in Episode 25 gives everyone a safety net, so they can leave an employer or a relationship at the first sign of abuse, rather than be locked into years of financial dependence and mistreatment, as way too many people are today.

Freedom is not zero sum. When you get the design, right, there's simply more of it for everybody.

But those extra freebies, such as free education, health care, transportation and basic income, do come with clear responsibilities: the green building codes to be developed that support the reference design; the involvement in routine governance I described in Episode 18; and most of all, the tax structure that I described in Episode 34.

Let's focus on the taxes. Edenicity's taxes are progressive, meaning that they increase exponentially with wealth and resource use. This is necessary to contain the bloat of affluence: things like gigantic houses, seldom use personal aircraft, meatier food that could derail Edenicity's main goal of ending the mass extinction. Clearly, to be fair and efficient, the tax system needs complete access to your financial history and your financial transactions in real time.

Does that make you kind of queasy? I get it. Most of us have transactions we don't want to make public, even if it's just a gift.

The problem is, we already live in a world that constantly infringes our privacy. It goes way beyond just your transactions. What's at stake now is your every whim and motivation. Say you're thinking of buying someone a gift. Better not search for it online, or even mention it within earshot of a smartphone. If you do that, it may trigger spoiler ads on your devices and that special someone's devices, too.

Forbes magazine and the Wall Street Journal have provided in depth coverage of exactly how many companies such as Facebook and Apple and Google track your physical and online activity to target ads.

We're not too far away from that sickening scene from the movie Minority Report, with Tom Cruise's character walking through the airport. The walls are festooned with eye scanners. Hologram ads pop up everywhere, constantly addressing him by name: "Hey John! John Anderton. You could use a Guinness right about now..."

These are the first steps down a very dark path. The technology of advertising can shape our decisions and our desires, our sense of who we are and where we belong.

Aldous Huxley saw the end game nearly A century ago, when he published Brave New World in 1932. But are modern tech's invasions of privacy even legal?

Oh, yes, it's all right there, buried in the vague terms and conditions that you promised to read when you started using each of your devices and apps. What? You didn't read each one? Well, that's okay. They all say mostly the same thing anyway, except not really. And they can and do change these terms all the time without notice.

Fortunately, Edenicity has the power to push back.

The principle is, whoever writes the agreement usually wins. Edenicities, either individually, in blocks, or throughout the whole franchise, should create standard legal terms and conditions that nip these invasions of privacy in the bud.

For example, if a company like Apple or Google wants to do business in Edenicity, it has to abide by a standard End User License Agreement written by the city. This would include terms like its devices and apps can't eavesdrop on people and use whatever they're saying, and wherever they're going to target ads.

Would companies put up with this? Absolutely.

Each Edenicity is the size of Singapore, and companies won't want to miss out on doing business there. Many tech companies will even relocate to Edenicity, because of its booming economy. All those freebies we mentioned earlier create a super affordable lifestyle that gives companies that locate there a huge recruiting edge over their competitors.

Sure, companies will push back and negotiate. But especially as Edenicity grows, it will gain power. Many services that we buy individually such as broadband Wi Fi, and some we can't buy individually such as truly private ad-free search, could be bid competitively at the city level in large blocks and provided to the public as a utility at much lower cost.

What's to keep Edenicity itself from falling victim to corruption? Well, its political structure is much more dynamic and democratic than the status quo (Episode 18 again,) and accountability flows very quickly up and down the line. We're talking about less than a week from block level meetings to city level decisions, and corrupt actors can be removed immediately when identified at each level.

This is a politically inclusive process, facilitated by the physical layout of the city. If the public wants, their city could buy a default option to turn off ads throughout entire services as big as app stores and search engines, and the ability to conduct random privacy audits of these companies (so they don't do anything sneaky with your data!).

▲ Okay, but what about those taxes?

An ecologically weighted tax system needs to be designed to do two things well: accurately judge the cumulative ecological toll of each purchase and maintain privacy.

This can be done algorithmically and kept encrypted especially if financial transactions go through a central bank or banks made accountable to the city government.

There's a huge upside to this: you don't have an annual tax event, such as a filing deadline with all the time, expense and worry that that involves. It's all handled in real time for you so it doesn't interrupt the flow of your life. You can look up what you're paying at any time and how you're contributing to society. And remember, Edenicity's political structure gives you a direct voice every week.

Think back to that invasive advertising scene from Minority Report. Isn't it amazing how powerless Tom Cruise's character is? Here's this tough cop, and he can barely find his way through a maze of ads.

That's the same helplessness I noted among billionaires designing their Doomsday bunkers in Episode 11. Despite their immense wealth, they felt like helpless cogs in a vast economic and political machine careening toward self-destruction.

Rather than machinery, Edenicity takes its design cues from ecology. One of the striking features of permaculture, which is basically applied to ecology, is how it's designed to include living beings.

Unlike machines, living beings have an endless capacity to negotiate and renegotiate complex relationships with each other and the world around them. This capacity drives every aspect of Edenicity's design. Rather than try and turn anyone into a cog, its layout provides more of what everyone needs to thrive while reversing the environmental harms of society as a whole.

This is the exact opposite of what climate deniers fear: an unelected global elite, hell bent on taking away everyone else's freedoms and putting them on an involuntary conservation diet.

Edenicity is a housing option where you have more freedom and security than anyone has ever enjoyed before.

What kinds of freedom and security? Every kind: physical, social, economic and political. And that comes with far more power to demand and to get privacy.

If you enjoyed Episode 39 please use the "share" button in your podcast player to let your friends know about it on social media. And be sure to join me next time when we'll rate the economic freedoms and ecological security (that is to say the Edenicity) of where you live now.

I'm Kev Polk, and this has been Edenicity.