Why small and slow solutions to environmental problems are doomed to failure and what to do instead.

Can we really expect to change things fast?
Intro [music]
Small and slow is foolish
The Meiji Restoration
How will it happen?
Close [music]
Sources

▲ Can we really expect to change things fast?

I hear that question all the time from environmental activists.

Here's the reasoning: it took us thousands of years of hierarchy, oligarchy, greed, patriarchy, etc. to get us into our current predicament with the environment. These are giant social forces with so much history, that we can't seriously expect to change them very fast.

What? That's completely beside the point!

We do not have thousands of years and I tell these colleagues, “if that's really what you believe you're basically giving up!”

We are going to lose the majority of the world's plant and animal species by this century unless we change nearly everything we do and change it fast. We're on the brink of killing off the honeybee and therefore a large fraction of the world's food. See Episode Two for details on that.

The United States has unraveled at a horrifying pace in just the last six months, because it's spent decades neglecting education, health care, and festering racism.

89 million Americans missed a rent or mortgage payment in July. I'm recording this on August 27 2020, and I just hope we don't have food riots by the time this airs.

As I've illustrated in 30 episodes over and over again, the problem is not some vast cloud of abstract long term economic and political forces we can't control. The problem is design. And the main solutions are well understood.

The challenge before us is to build Edenicities now, and keep building them until the majority of the world's population lives in places with sound ecological design.

We've got maybe 20 years to get it done. And I'm a huge optimist.

“Yeah, but 20 years to rehouse most of the world? Can we really change that fast?”

Welcome to Episode 31, where I'll discuss the Edenicity of big and fast change.

▲ Small and slow is foolish

I just checked and I can't believe I let permaculture off the hook for its number one sin: emphasizing small and slow solutions.

Thank permaculture co-founder David Holmgren for that one, as small and slow is the 9th of the 12 permaculture principles laid out in his book, Permaculture: Principles and Pathways Beyond Sustainability.

No wonder so many permaculturists are afraid of big, fast change.

To be clear, using small and slow solutions is just plain wrong. As I showed in Episode 3, where I discussed how China used permaculture techniques to restore 3 million hectares of desert to lush greenery and triple rural incomes at the same time.

As filmmaker John D. Liu points out, that land has been degrading for over a thousand years, but it took just a decade to repair.

I rest my case.

What? You need more proof? Okay, here we go.

And actually I do understand where you might be coming from if you doubt that change can happen this fast. I mean, we're not just talking about reorganizing some agricultural practices here. We're talking about restructuring housing, food, energy, industry and transportation all at the same time.

Has that ever happened before?

In Dan Carlin's Hardcore History podcast, Episode 62, he gives a detailed account of the Meiji Restoration, which modernized Japan in a span of about 20 years.

Here's a quick summary from that episode with details filled in by Wikipedia.

In 1853, US Commodore Matthew C. Perry's gunboats opened Japan. Japan’s Samurai with their body armor, swords and spears, could not resist Perry's cannons and guns.

Perry forced a treaty the following year that ended Japan's 220 year old policy of isolation that had prescribed death penalties to anyone engaged in foreign contact.

A rising class of Japanese oligarchs realized that Japan would soon become a victim of colonialism if it didn't take initiative and modernize. As Dan Carlin puts it in his podcast, the oligarchs sought to make Japan a “predator nation” as fast as possible, so it could avoid the fate of becoming prey to colonial powers.

By 1868, the oligarchs had overthrown the Tokugawa Shogunate and established a new state with a military loyal only to Japan's latest Emperor, Meiji. One of the first actions of the Meiji government was to publish the Five Charter Oath, which made sweeping social changes and sent observers throughout the world to copy the leading Western nations in each area: governance, military, education and many different industries.

It was like the premise of Michael Moore's movie, Where to Invade Next: figure out what your country is really bad at compared to other nations, find the nation that does that thing best and copy them, and do this in each area of life.

Over just a couple of decades, the Samurai became teachers, administrators and gun makers in their new society, and the Meiji government standardized the language to one dialect. There was massive industrialization in Japan in this period. For example, there were only 29 kilometers of train track in 1872. This increased 13 fold to 390 kilometers by 1883. And it increased another nine fold to 3,400 kilometers of track by 1894. Silk and coal production also grew exponentially in the same period.

This is how, in 20 years, Japan completely redesigned its society in a time of severe external stress.

And by the way, according to Wikipedia and Carlin, Thailand used the same playbook over the same timeframe to resist colonialization by centralizing and modernizing its government and industry as well.

Okay, so Japan was able to completely redesign its society in 20 years. What about the United States?

Well, actually, we've done something almost as big in much less time within the past century. Between 1940 and 1945, US military forces increased something like 2,600% in order to fight World War Two.

This had the effect of launching or accelerating all industries related to transportation, and resulted in both a jump and an upward trend in both defense spending and industrial output persisted for many decades.

This was a huge change that took place in just five years.

Yeah, but we're not at war, at least not as I record this. So how does this apply to building cities?

▲ How will it happen?

Now, Edenicity is about land development. So maybe it would be more accurate to look at how fast it's possible for a business to grow.

While I was putting together my notes for the next episode, National Public Radio ran a piece on how Apple briefly achieved a market value of $2 trillion and how that would make it the eighth or ninth largest world economy: about the same as Italy.

But this is actually a mistake because it compares gross domestic product (the total value of all finished goods and services produced by a nation in a year) to how much people value the company on the stock market.

For hot tech companies, market value is running at something like 8x their annual earnings. The correct apples to apples comparison (sorry, couldn't help the pun!), should be between GDP and revenue.

And when you do that for Apple, which earned $260 billion in 2019, that would make it the world's 45th largest economy: about equal to Vietnam.

But since we're focused on the question about how fast a business entity can grow, let's look at amazon.com.

In just 25 years, amazon.com has grown from zero to $233 billion in annual revenue. That's more than the GDP of Greece. That is to say basically all the money that is spent on finished goods in a year in Greece. And Greece has been around for 5000 plus years! And some would argue that it's also the origin of all those long term historical forces that my activist friends were railing against at the start of this episode.

The point is that Amazon reached a higher level of economic might 200 times faster than Greece did.

Now, Edenicity doesn't need a Meiji Emperor or a major world war to happen fast. It will use the same market forces that propelled Amazon.com’s earnings growth 200x faster than the nation of Greece. But Edenicity will create many, many times more value than Amazon has.

There's a quote attributed to Roy Disney that goes: “when your values are clear to you, making decisions becomes easier.”

What are the values that Edenicity speaks to?

Well, in Episode 27, I pointed out that about half of Americans are concerned about the environment. I would also suggest that more than 99% of us would like to cut our living expenses in half.

Even if it meant free health care, transportation and education? And healing the world at the same time?

As I pointed out in Episode 25, Edenicity won't need to hand out tax breaks to attract employers. Quite the opposite.

As reported in Politico in 2017, Colorado Springs tried libertarian austerity and it didn't work. The economy sputtered until the city strengthened its commons by turning the streetlights back on and by building deferred road improvements, park trails and stormwater projects. Only then did it attract new employers and enjoy a big surge in jobs.

Edenicity will have by far the finest Commons in the world because its ecological design is sound.

As an economic hotspot, Edenicity will attract investment.

According to a June 2020 Wall Street Journal article, investors are just sitting on the biggest piles of cash ever, and interest rates are low. There's more money chasing fewer opportunities than ever.

I think of Edenicity as an economic ratchet: you know, that mechanical device that permits movement in only one direction? Some examples are turnstiles, caulking, guns, socket wrenches, cable ties, and the dials on diver’s watches.

Like a ratchet, Edenicity will act as a one way door to a new lifestyle:

The cost of living will be half what it is in car-choked cities. Convenience, which could be measured in commute times or paperwork, will be 5 to 10 times better. Health will be 50 to 80% better. You'll live in a quiet garden park with no pollution or traffic, with a vibrant cafe culture, just four minutes away from a bustling city center. Your children or grandchildren walk to and from school in less than five minutes, sometimes snacking on the edible plantings along the way.

Who could leave that?

It will happen big and fast and people living in Edenicity will feel freer, richer and more secure than they would living anywhere else.

And that is how we'll save the planet... fast!

If you enjoyed Episode 31, please use the “share” button in your podcast player to let your friends know about it on social media. And be sure to join me next time when I'll discuss how Edenicity uses, generates and stores energy. It's a real mind-blower that you won't want to miss!

I'm Kev Polk, and this has been Edenicity. 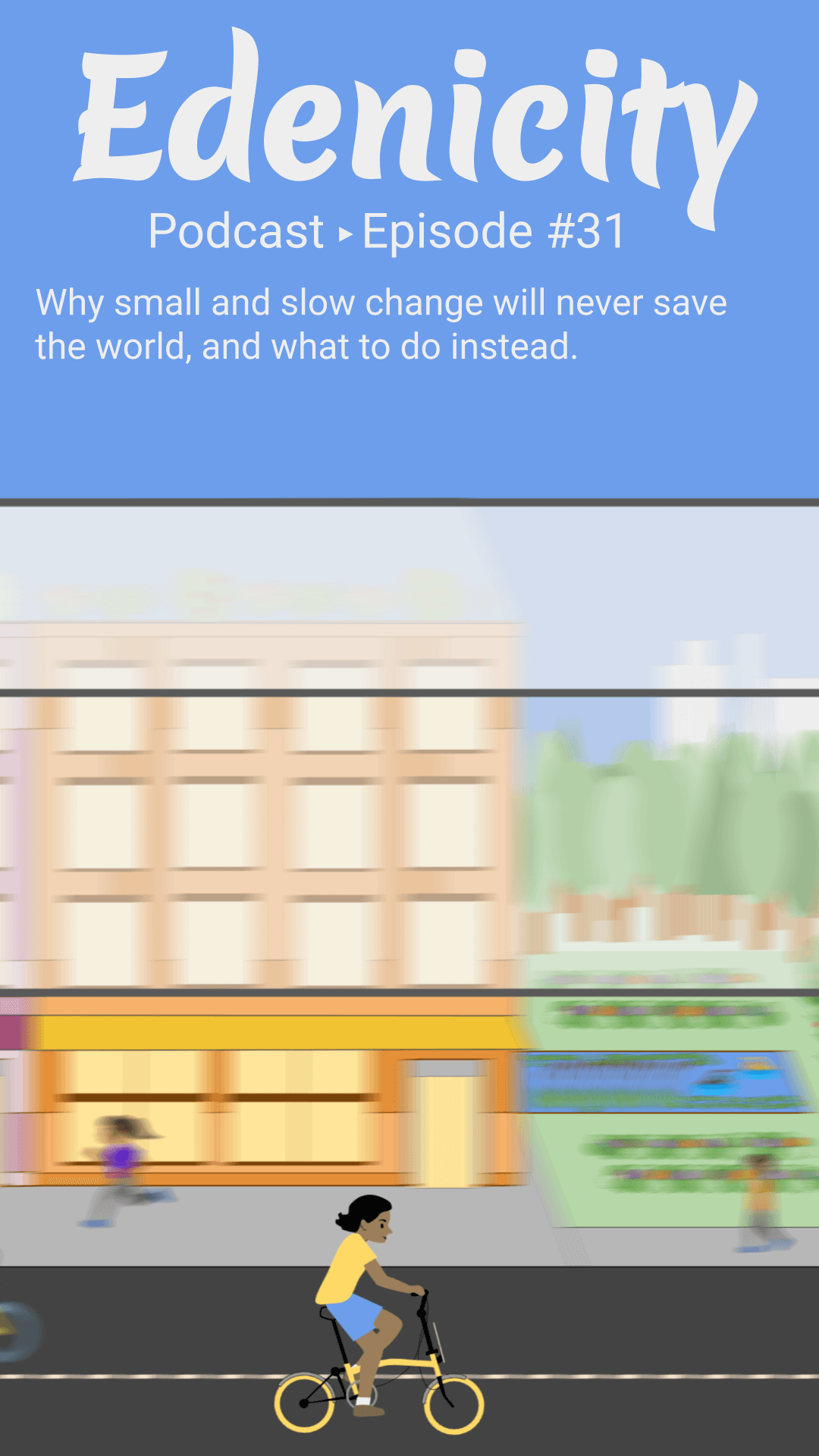